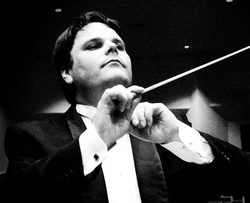 Dr. Lawrence Spell has dedicated his career to inspiring students to achieve the highest standards of musical performance. As Director of Orchestras at Salt Lake Community College and Assistant Conductor for the Utah Youth Orchestras and Ensembles, he has developed a reputation for getting results from young musicians by creating a positive and collaborative rehearsal environment. In addition to his work with student musicians, Dr. Spell is also currently the Music Director and Conductor for the Wasatch Symphony, one of the oldest orchestras in the State of Utah.

Dr. Spell earned the Doctor of Musical Arts degree from the University of Utah and the Masters of Music degree in Orchestral Conducting from East Carolina University. During his time at the University of Utah, Dr. Spell served as the Assistant Conductor for the university orchestras and the Salt Lake Symphony. Before moving to Salt Lake City, Dr. Spell was the Music Director and Conductor of the Pitt Community College Symphony Orchestra in Greenville, North Carolina. In addition to his duties leading the orchestra, Dr. Spell was responsible for ensuring the success of all the performing arts programs at PCC in his role as the Coordinator for Music and Drama.

Dr. Spell has devoted a large portion of his academic research and published writing to the application of Laban Movement Analysis to conducting pedagogy. In this area, he has studied with Certified Movement Analyst Jackie Hand and Dr. Charles Gambetta, the developer of the Embodied Conducting Method. Dr. Spell uses LMA in both his private conducting studio and his collegiate conducting classes. Recently, he was appointed to the conducting faculty of the Mastering the Concerto Workshop, a component of the International Institute for Conductors in Vidin, Bulgaria. At the workshop, Dr. Spell mentors advanced conducting students from around the world.
Wasatch Community Symphony  |  P.O. Box 9145, Millcreek, UT 84109  |  Photo Credits to Kevin Buckingham at krbuckingham@gmail.com
Powered by